Asia continues to supply a solid local source of intra-regional visitation feeding around 94 percent of foreign arrivals, contributing to a record of 636 million total foreign arrivals into the Asia Pacific during 2017.

Source market, China, tops the list with over 112 million arrivals into the region, followed closely by Hong Kong (95 million), with Vietnam and Nepal enjoying the fastest growth.

“2017 was yet another record year for the aggregate volume of foreign arrivals into Asia Pacific,” said PATA CEO, Mario Hardy as he introduced the report. “Significant variability was once again evident with 30 of the 47 destinations covered in this report showing annual growth increases in excess of five percent – in fact 17 of these were in the double-digit growth range, and with only a few showing contractions.”

The highest volume of supplier markets into Asia Pacific in 2017 based on foreign arrivals:

Some 14 source markets generated in excess of 10 million arrivals into the Asia Pacific region in 2017, however the report notes that the additional volume of arrivals generated between 2016 and 2017 changes slightly and ranking of the top five markets delivering the highest additional foreign arrival volume as: 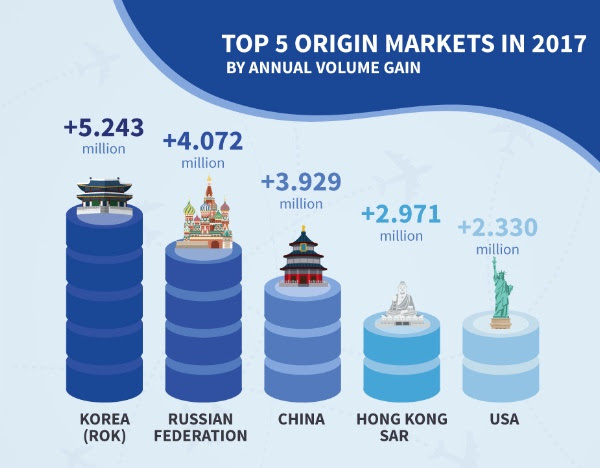 The full PATA report can be found here.