Eid al-Fitr: How Malaysian digital tour operators have an edge

In a few short weeks, the Eid al-Fitr holiday will take place in the Muslim world, meaning that the tourism industry will gear up for one of its busiest times of the year. This is especially true for destinations popular among Muslim travellers—a demographic fast becoming one of the most globally significant to the industry at large. These include traditional mainstays like the United Arab Emirates, Turkey, and Indonesia, as well as Muslim-minority countries like Spain, Australia, Korea and the Maldives.

For several years now, the Muslim travel market has experienced exponential growth. It currently represents more than 10 percent of the entire industry, valued at approximately US$168 billion in 2016. Muslim expenditures on outbound travel is expected to grow by 9 percent per year to reach US$283 billion by 2022. The segment has already begun to outspend the Chinese travel market.

Malaysia has long been a popular destination among Muslim travellers. According to Malaysia’s Islamic Tourism Center, as many as 5 million Muslim tourists descend on the Southeast Asian nation every year. However, as the Muslim travel market becomes ever more lucrative, more and more businesses are heating up the competition internationally and locally. As tourism players jostle to stake their claim over various consumer segments, some online tour and activities operators are beginning to apply tech and digital solutions to help them stay ahead of both traditional offline operators and their neighbouring rivals.

As has been the case with many other industries, the rise of technology and digital platforms has enabled businesses everywhere to work more efficiently and cope with bigger workloads. The travel industry is no exception, as more bookings shift onto web-based channels. Innovative technology is also starting to solve problems that offline players have never been able to crack.

For example, one of the major challenges during the peak season is the sheer volume of travellers that businesses will have to accomodate. Eid al-Fitr is a time when the Malaysian industry will face a brief but intense season, during which operators will be expected to cope with the burden of an outsized number of bookings and inquiries. They will also be immensely pressed for time when it comes to execution business processes.

By and large, offline tour and activities operators in Malaysia are reliant on paper-based ticketing and more personal communication channels. This means that they are less efficient than operators who choose to rely on digital channels. As is the case each year, they may struggle to manage a large number of bookings with a limited amount of manpower. This is sharp contrast to online operators, who are able to rely on the power of automation and big data tech to accommodate hundreds of bookings simultaneously. The effect is readily observable as today, more travellers in Saudi Arabia—who represent a valuable market segment—are utilising mobile platforms to make travel bookings. As much as 40 percent are organising their itineraries online.

Having an online channel can give tour and activities operators an edge over their offline competitors as it streamlines the entire experience for the consumer, particularly during Eid al-Fitr. Convenience and ease of access are potent draws for travellers; by integrating their products and services on digital platforms, tour operators can move faster to snap up customers and provide a more seamless experience.

Technology and online channels can also help solve the biggest problem in the halal travel market: the lack of information on halal products and services. Muslims travellers want to be able to receive the same tourism experiences that non-Muslims enjoy with facilities, products and services that reflect their values and faith. Eid al-Fitr represents an important time for the accessibility of Muslim-friendly businesses in Malaysia. Having a digital channel will allow operators to better communicate their offerings to potential customers during the holiday season, and help travellers plan their trip around the period.

Malaysia’s Halal Navi and Singapore-based website Have Halal Will Travel are helping to reimagine the ease of travel for Muslims by providing app-based guides. The biggest challenge for Rafiq Rahim, who launched Halal Navi, came in the form of finding halal food outlets or prayer rooms. For Rahim, this was difficult in Muslim-minority countries.

Digital channels can ease the pain in this respect, as tour operators will be able to quickly and clearly convey their Muslim-friendliness. They can also make themselves more easily discoverable. This is unlike traditional tour and activities operators who rely heavily on phone communication. These operators are sure to find it challenging to directly connect with target audience during the holiday.

Digital channels also allow operators to be more flexible for their Muslim customers, as they can more easily accommodate differences in culture, preference and restrictions. For instance, hotel booking platform HalalBooking is able to give “precise total family pricing,” which has become crucial for travelling Muslim families. According to Antoine Medawar, Vice President of Amadeus MENA, “The typical halal traveller group is a family or extended family, often including two to three generations, with very diverse interests.” 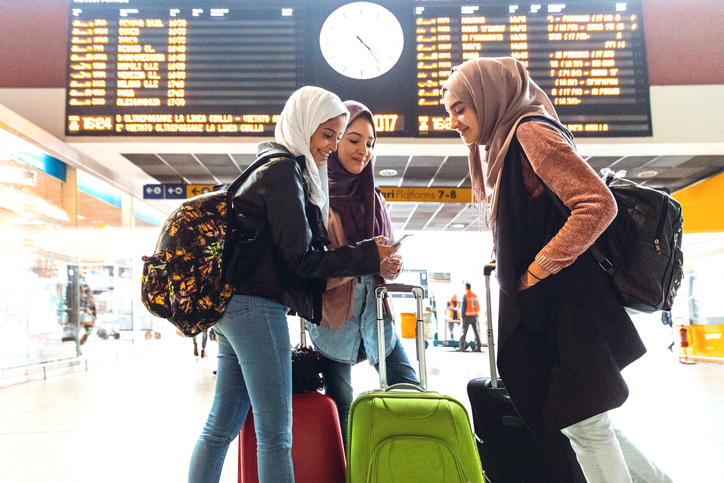 A major factor to take into consideration as well is the shifting demographics of the Muslim traveller. Today, travellers are getting younger than ever before as tech-savvy millennials become the biggest slice of the segment. Almost 60 percent of all Muslim populations are aged below 30.

"Travel within this young generation of Muslims is booming as consumers with more disposable income seek more exotic experiences and far-flung destinations than their parents," said Fazal Bahardeen, CEO of HalalTrip. "Their per trip expenditure could be lower than the earlier generation but since they make multiple trips per year, their overall expenditure is higher."

This generation is very much a technology-first group. Having apps and digital interfaces has become non-negotiable as this generation and they are more likely to organise trips through digital platforms. Why are they such an important demographic for operators? Well, for starters their disposable incomes are rising, which is helping to drive their travel spend and an industry boom to the tune of US$300 billion.

Tour and activities operators in Malaysia who don’t utilise digital channels will miss out on this generation, in which each person has on average four to five web-connected devices, and who demand self-serve tech options. This is a generation that is best described as “proud of their faith, enthusiastic consumers, dynamic, engaged, creative and demanding,” which means that having Muslim-friendly options is crucial for them.

As the world’s number one destination for Muslim travellers, Malaysia’s tour and activities operators who are unable to communicate their halal status to the digitally-engaged Muslim will lose out this Eid al-Fitr.

Samantha Cheh
Samantha Cheh is a freelance journalist based in Kuala Lumpur. She was previously a staff writer with Tech Wire Asia, and has been published in South China Morning Post, Reuters Salaam Gateway, Art Republik Singapore and New Naratif. She’s most writes at the intersections of technology, travel, culture and society.