Good news: there will soon be dragons afoot in Singapore. Well, not exactly dragons, but dragon boats. The Singapore Dragon Boat Festival 2015 will showcase dragon boat races in 24 categories including Open, Women, Mixed and Senior categories. Teams from all over the world will be participating, and it’s a great idea for a family day in the sun.

The races may be fun to watch, but can you guess how the races began in the first place? Hint: it involves thunderous drums, political intrigue, desperate dumpling disposal and a river dragon – not very different from a Game of Thrones episode, come to think of it.

Also known as the Fifth Month Festival, or Duan Wu Jie, dragon boat races started out as a way for fishermen and farmers to keep the river dragons happy. They believed that the river dragon, a yang (masculine) entity in folklore, kept the rains coming at a moderate pace which ensured bountiful harvests while avoiding flooding. (Or, as it is known in Singapore, “ponding”.)  For those who are in love with Daenerys Targaryen’s dragons, here is a little bit of dragon trivia for you: ancient Chinese dragons had a horse’s head, a snake-like body, wings like a bird, and four or five legs, with four claws per foot if they were everyday dragons, and five claws per foot if they were imperial dragons.

The Dragon Boat Festival gets more interesting when history, palace intrigues, and politics are threaded into the legends. In the third century B.C.E., Qu Yuan was a minister of the Chu state. Things were getting ugly, as the Chu state was caught up in chaos caused by the period of the Warring States. Being the people’s champion that he was, Qu Yuan tried to warn his king that the threat from the northern Qing states was deadly serious. Unfortunately, instead of thanking Qu Yuan or perhaps beefing up defences, the king banished Qu Yuan, who was the victim of power plays and political intrigues in the palace. The Chu state was then run by corrupt ministers, and Qu Yuan turned to poetry to express his extreme disappointment with corruption and the possible invasion caused by inept ministers. (In case you were wondering, his poetry was very well-received.) 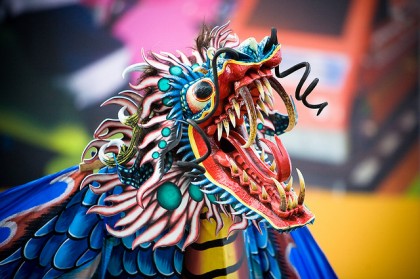 After the Qing armies invaded the Chu state, a despairing Qu Yuan threw himself into the Mi-Luo River, seeking to end his life. Some nearby fishermen quickly threw rice wrapped in leaves into the river, hoping that the man-eating fish in the river would devour the rice instead of their well-loved minister. That’s how dumplings got woven into the customs of the dragon boat festival. Other versions of the story say that the fishermen rowed out to the Qu Yuan in an attempt to save him, and the tradition of the races honoured his sacrifice.

Dragon boat races started as early as 770–476 B.C.E. and grew from being a ritual for clement rain patterns to a training method for the navy. In contemporary times, the races have morphed into a far more cheerful tradition than earlier incarnations, e.g. keeping powerful river dragons happy and commemorating dead politicians who wrote really good poetry. Only much later during the Han Dynasty did the races become a sport, with drums and lanterns adorning the brightly decorated dragon boats, similar to contemporary race boats.

Fun fact: when dragon boat races started out, it was completely legal to throw sticks and stones at one’s opponents and topple them into the river. If they drowned in the river, it was considered a sacrifice to the river dragon, and the race would continue. Happily, this aspect of the ancient dragon boat races does not feature in modern competitions.

Getting there: Bedok Station is the nearest MRT station, and you can grab bus 228 from the bus interchange at Bedok which will take you to Bedok Reservoir. At $16–$20 from town to Bedok Reservoir, a 15-minute taxi ride may be a less cumbersome option if you are determined to win an award for the biggest picnic basket at the festival. (Note: this is not a real award.)

Bring: Your own food and drinks, a picnic mat, and sunscreen. Dress for humid heat and sun.