Theme parks: What’s not to love about them? Campy fun, rollercoaster rides, and lots of snacks – the list goes on. To make planning for your next thrilling theme park adventure a little easier, here’s a breakdown of some of the best theme parks in Asia. 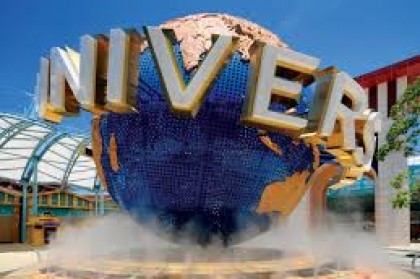 Resorts World Sentosa in Singapore has a lot to offer: Universal Studios, the S.E.A Aquarium, Adventure Cove Waterpark, and the Trick Eye Museum. Universal Studios is a family-friendly assortment of rides, character appearances, shows, and restaurants divided into seven themed zones surrounding a lagoon. There’s something to please all the kiddoes in the family, with themes including Hollywood, Sci-fi City, New York, Far Far Away (Shrek and company), Ancient Egypt, Lost World (who doesn’t love dinosaurs?) and Madagascar. The S.E.A. Aquarium is a sprawling showcase of over 100,000 marine animals and 49 habitats, including – gulp – hammerhead sharks and Asian marine habitats such as the Red Sea, the Andaman, and the Straits of Karimata. If that fails to amuse, head over to the Adventure Cove Waterpark, or ham it up with silly poses at the Trick Eye Museum. 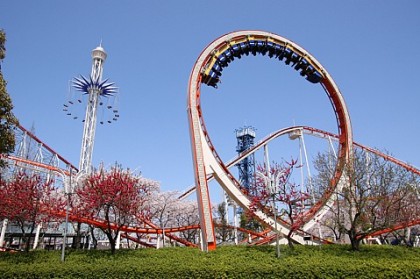 This behemoth of an amusement park just outside Nagoya includes the Nagashima Spaland amusement park, a water park with a huge seawater pool (only in the summer), a hot spring complex, a shopping mall and a flower park. Considered the best amusement park for rollercoaster rides in west Japan, Nagashima Spaland has over 40 adrenaline-boosting rides as well as a decadent spring bath complex with both indoor and outdoor baths. The imposing – and impressive – Steel Dragon ride greets visitors the moment they enter the park, and this leviathan of a rollercoaster ride spans the entire length of the park. The shopping mall is an outlet mall carrying a plethora of international brands, providing several happy hours of retail therapy for those who prefer not to tangle with the Steel Dragon and other assorted challenges to gravity. 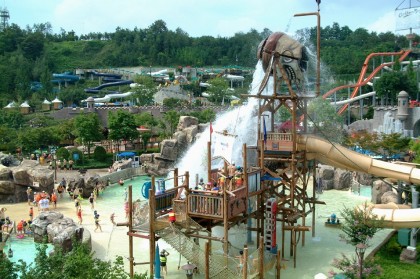 Part of the Everland amusement park, Caribbean Bay is the biggest indoor and outdoor water park in the world. If you’re in Seoul, it’s definitely worth a visit, if only for the Caribbean Bay Spa. While the kids are frolicking in the wave pool or fighting imaginary pirates in the Adventure Pool (complete with water gushing from a giant skull), the numerous spa experiences at Caribbean Bay offer something for everyone. There are hot springs and sauna facilities for tired feet and aching muscles, a Jasmine Tea Spa to ease stress and nervous tension, and the Miracle Spa, which features a salt sauna and a couple’s footbath. You can grab a handful of salt and use it slough off dead and dry skin while you’re in the salt sauna – fun! Tired parents can nap like royalty on jade beds in the Sleeping Room, with carefully controlled temperature and towels for rent. How’s that for slumbering in style? 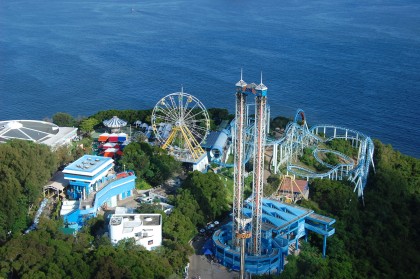 This massive theme park centred on marine life wears many hats: marine park, amusement park, and oceanarium. Apart from its top-notch entertainment factor, Ocean Park was also the first Asian theme park to win the Applause Award, which is the highest recognition the amusement park industry has to offer. Ocean Park’s unique blend of conservation, education, and good old-fashioned amusement park thrills and spills is a superb combination, and you can rest easy knowing part of ticket revenue at the park goes to wildlife conservation efforts. Also laudable is the park’s Marine Rescue Team initiative, which rescues injured animals in Hong Kong waters in collaboration with the Hong Kong Agriculture, Fisheries and Conservation Department. 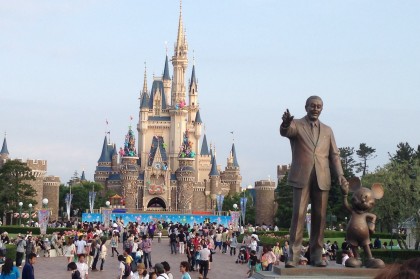 Last and arguably the best on this list is Tokyo Disneyland and Disney Sea, twin resorts at the Tokyo Disney Resort. The major difference between the two parks is that Disney Sea has a nautical theme.  Apart from this, both parks offer a dazzling array of rides, roaming Disney characters, parades and shows, as well as shops and restaurants. Frozen fans will be glad to hear that the Tokyo Disney Resort has announced a multi-billion dollar expansion to the park, comprising the port of Arendelle in a Frozen-themed Nordic area, which is scheduled to open after 2017. In the meantime, you’ll just have to stick to singing “Let It Go” in the shower. Both theme parks are easily accessible from Tokyo via direct bus and train.

We hope you have enjoyed this list of top five theme parks in Asia, which one will you visit first?

For more thrilling experiences, check out our active and fun category!